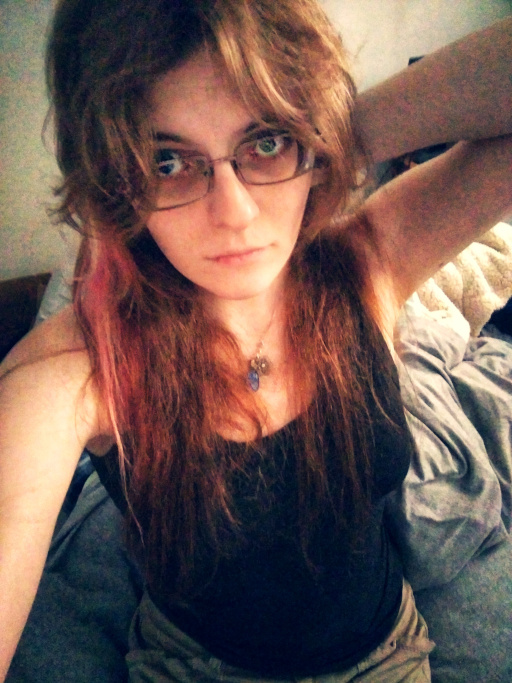 hi. i'm winter, a.k.a. lexi hale, a.k.a @velartrill. i'm no one important, but occasionally i write fiction, essays, or stories that i want to share with whatever tiny audience might be interested in them.

i mainly write speculative fiction serials, tho writing Approved News 6 is the only thing i'm actually known for, and the one i care about the least.

my main focus right now is the collection of sci-fi serials Spirals, of which i've written around a novel's worth of text. the Spirals stories are somewhere between social fiction, psychodrama, and smut; while they go to what i've been told are some pretty dark places, they are fundamentally stories about wounded people finding healing, and the lost coming home. the war is over: what comes next?

the other aim of Spirals is to explore and present radically different ways of living, of relating to the world and to each other as human beings, showcasing different and deeply alien systems of belief, culture, and civilization. too much fiction takes the basic, often depressing strata of western social and political life for granted, retelling the same boring stories over and over again In Space. i'd rather explore all the ways the world can be different, for better and for worse.

my side focus is the Axis setting, a low-fantasy canon set in a world where all the old assumptions are rapidly unraveling as a fallen empire's lost secrets emerge unexpectedly into the glare of daylight. the Axis series Flight is the one currently being updated; if you like stories about bisexual vampiresses, it might be your kind of thing.

Spirals, along with all my other writing, is available online to read for free at my primary website; free culture is important to me so i don't put my work behind paywalls as a rule. be warned, however: i’m a traumatized mess and i write what i know. these stories are full of the kind of mental illness, drug addiction, abuse, mistreatment, and violation that my life has been defined by. sexual violence is a recurring theme.

for me, the most important part of writing is learning how my writing impacts others. what conjures up emotion, what piques their curiosity, what upsets them. what they want to learn more about, which characters they find morally repugnant — i'm always deeply curious and i welcome any and all comment. i can be reached on twitter at @velartrill, on the fediverse as velartrill@pleroma.site, and you can probably guess my email address (hint: it doesn't have “velartrill” in it).

this isn't my main web presence; that's over at ʞ.cc. i don't usually publicize hale.su very much; i use this server mostly for email, fossil repo hosting, and to run a few of my personal projects. the public ones are listed below.

if you like the stylesheet i use and want to use it yourself, check out serenity.css.

(if you're wondering about the screenname, it's a linguistics joke. a “trill” is something that we call a “method of articulation;” the most common trill is the alveolar trill [r], the Spanish ‹rr› sound. "velar" is a place of articulation, a part of your mouth the tongue makes contact with or creates airflow against; sounds that occur here include the velar stop [k] like the first consonant in “cat,” or the velar fricative [x] as in Spanish “jefe.” the “velar trill” is an impossible sound; it describes a motion that the human articulatory apparatus cannot physically perform.)